A downloadable game for Windows, macOS, and Linux

May the Murder Survive

To save his murder, a humble crow scout is ordered by his king to deliver mysterious scrolls to three dangerous rivals before sunrise. 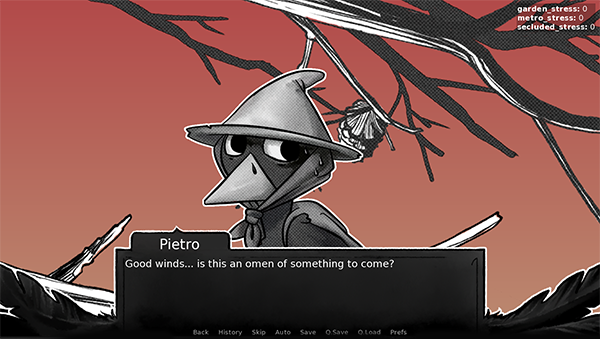 Pietro is approached in the middle of his watch by the king of his murder. Rumor has it that King Bosco is losing his mind… is that why he’s sending a single scout to meet covertly with the leaders of the surrounding flocks? Find out if survival is in the cards as you lead Pietro on a fateful flight beneath the stars…

One murder. One month.

This game was made for the 2022 Spooktober VN Game Jam. 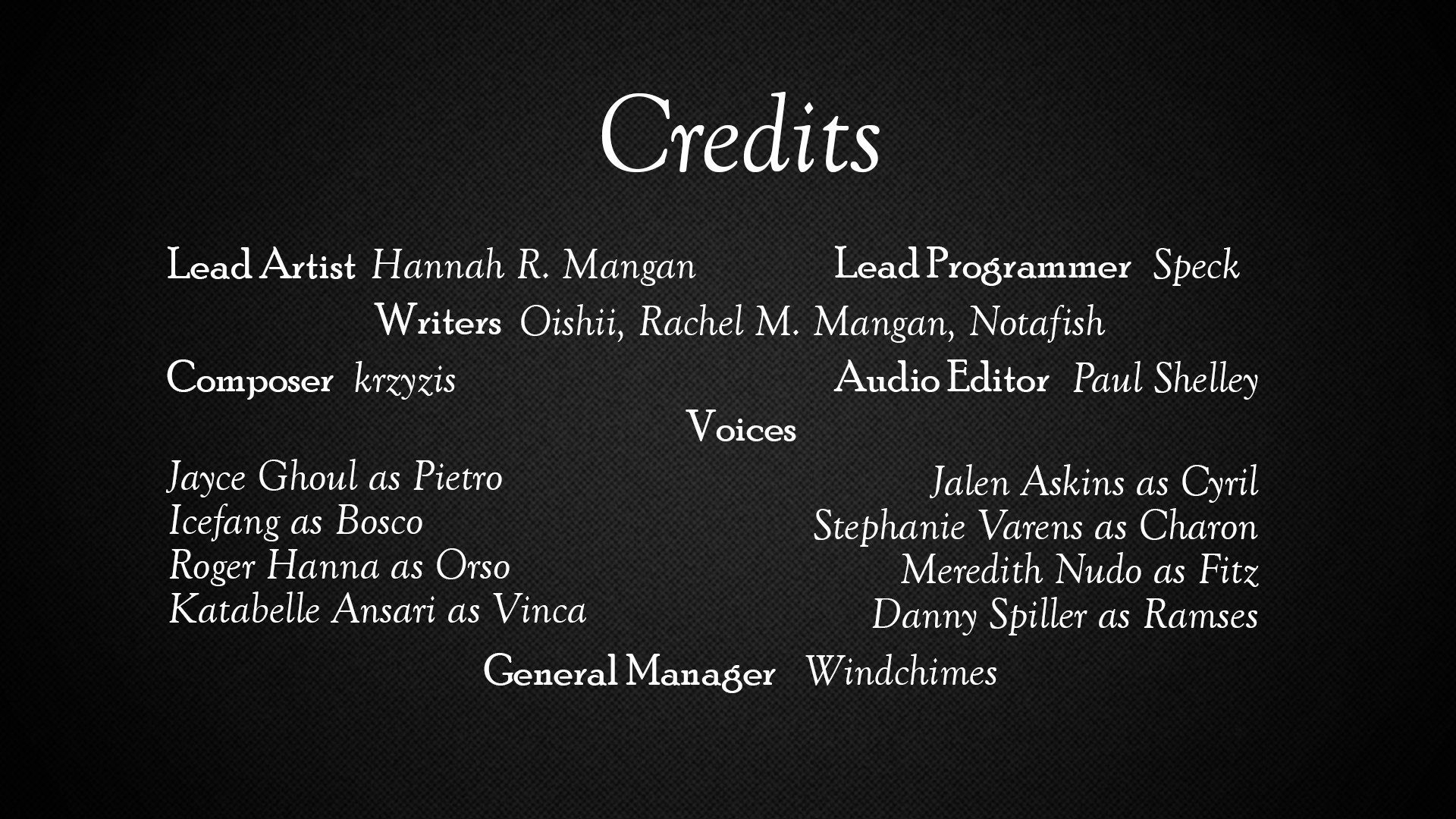 I'll be honest, when I saw the cartoony style of the sprite and the fact they were animals, I didn't think I'd get too into this. Boy was I wrong. I don't know what to praise first. I guess I'll start with the GUI. I think I've never seen such a beautiful GUI in my life. And it's not just the motif seeping into the dialogue box, and even the mouse pointer - the fact that it has an animated background that reacts to the mouse movement-- fricking awesome! It goes hand in hand with the cinematic too, because the elements interact with each other and with the simplified negative-space background in a way that's always very aesthetic and dramatic. It's hard not to be in awe.

Since we are on the subject of aesthetics and cinematics, I think I should talk about those beautiful sprites. Despite being cartoon style, they are expressive in all the right ways. More so considering this isn't a cartoony story at all lol, but I'll get to the writing later. There's something about the sprites interacting with the backgrounds and the GUI that's just blowing my mind. See the protag. He's the one that's the most cartoony and personally least favorite design, but even he-- the way he is painted is artsy in a way that breathes, even when the image is static. Then the rest of the characters are full of life... I swear, from the moment the king appears on the screen, with his darting eyes and movements - oh man, the movements! Every sprite move indicates an action, and that's so awesome. I'm flipping at the programming work, I swear.

I guess the next thing I'm going to praise is the voice acting. The actor and actresses were right on the money in all accounts. They got the characters, and rolled with it, and damn it's even fully voiced O_o Nailed it. Just that. No line of text sounds forced or out of place, even when they are playing a caricaturesque type character.

Well, it's kind of impossible to talk about the voices and not talk about the script too and, wow. I seriously didn't think I would be so invested in these characters and story. The prose is great but non-invasive. And the plot hooks you. It honestly does. It doesn't have any of the beats someone might expect in a VN, and in fact that was what made me think about skipping this initially. And I would have been totally wrong, because that's this story strongest point: this is original. It's a break from playing the same old stories and finding something new. And because it's new, I don't know where it's going and that's what hooks you and what makes the experience worth having. I want to get to all of the endings and re-live my choices, that's how good this is.

Actually, that's the other thing: I want to see all through... but the game is very bugged lol XD It seems the game is stuck in the ending with the magpipes and sewer group invading and the veteran leaving, no matter what choices I make. It must be something about the last update because somebody mentioned 8 endings. (I was going to mention the thing with the missing image in the owl clearing and the error in the sewers if you call on the bluff, but somebody else already mentioned that.) The real problem here is that I never get to get the other stories. Have mercy XD I came over here to see if there was a guide in case I was doing something wrong but I now see it's a bug thing. And I hope you get that one fixed because I'm dying to know what happens next.

Btw, I don't want to leave without mentioning the soundtrack and the itch.io page design. Hotdamn. Everything looks beautiful and thought-out carefully. Whoever is in charge of aesthetics really knows what they are doing. And the music-- Perfectly setting ambience, in a way that's going with the writing and it manages to sound gentle to the ears. No small feat considering the tracks keep playing for long chunks of text. What a treat. My favorite has to be the sewer/mafia-themed song. Also, can we mention that each scenario has it's own track?! If I didn't have the GUI, the cinematic, programming and writing+delivering to point out, I would have praised the music first O_o You make it very difficult to pick what to talk about lol. (Almost as difficult as picking who to talk to first or ask for help from the three kings choices lol)

You know, I should consider you my competition, but I don't care. I want you to win the contest. I don't think I've seen something so meticulously and complete in a very long while. And if this was done in a month... very impressive indeed.

The plot and the storytelling are quite well done. But the bugs are just so merciless.  No matter which choice I pick, it ends up with Orso joining the alliance. Well tbh, I guess I did get most of the endings though. The only one I'm missing is the Cyril's alliance.
Also that "skip the  minigame" button is pretty messed up. It doesn't disappear after skipping the game, so when you press it again you'll be kicked back to the post-minigame process(even if you were on a different mission). And if you press it after delivering all of the messages, you'll be thrown back to Orso's or Cyril's place. Try and guess what happens when they ask for their scrolls? You won't have any! lol and the game comes into a dead end.

Hope these will be fixed soon :)

This is a lovely game! Nice to see a monochrome art style, and the voice acting was superb. Can't wait for a polished, bug-free version! I too got only the ending where Cyril disappears (if you don't count all the dead ends!).

Very unique game! The gamepage was very appealing too, which influences a LOT if I decide to play a game or not. I'm glad I did, because this ended up as one of my favs of the Spooktober submissions so far ^^ The aesthetic is amazing and I just overall enjoyed this.

One of the best games I've played for Spooktober yet. I love the voice acting and art style for the game. 10/10

Loved this game, one of the best I've seen from Spooktober for sure. The art style is stellar and very distinctive, the voice acting is great, the leaders were all engaging characters.

One thing though, I played through the story a few times and always got the same ending (magpies and rats attack, Cyril disappears) no matter who I gave the letters to, even if I get one of the leaders to agree to help the crows. I'm on a Mac if that helps.

Oh boy - thank you so much for the bug report! We'll look into it!

Definitely one of the top tiers in the jam. I love the animation of this game! The monochrome aesthetics is also a good touch. Voice overs are also great. I just hope that that the mini game is more forgiving since I still want to beat those cats.  :D 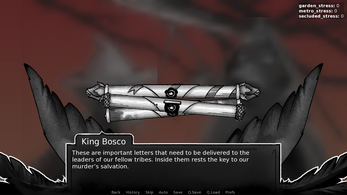 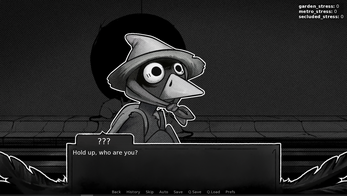 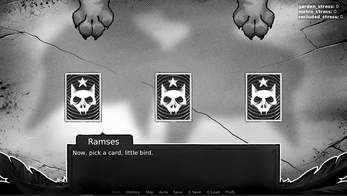 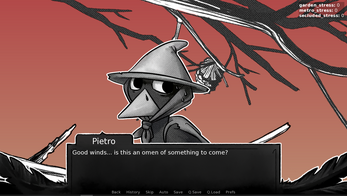